A history lesson on education for black children in WV

This post is copied from a post on Facebook by Gibbs Hinderman.  Information comes from the WV Encyclopedia.  It was written by Dr. Ancella Bickley, former WVSU professor who now resides in FL, I understand.  This is not entertainment….just history.  Enjoy. 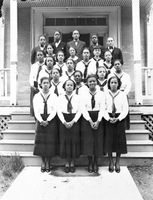 Early black education in West Virginia developed through a combination of forces: self-help efforts; the aid and support of benevolent white people; support from the U.S. Freedmen’s Bureau and missionary associations; and the activities of public school officials. By the middle of the 20th century, on the eve of desegregation, the state’s African-American schools had become a well-functioning, effective system.

When the first West Virginia legislature met in 1863, it agreed to educate ‘‘free colored children,’’ but the proposition was left unfunded. With the condition that white and black children should not be taught in the same schools, West Virginia’s second constitution in 1872 affirmed the state’s commitment to the education of African-American children. Although most school boards cooperated, court action sometimes had to be undertaken or threatened to force some to provide the needed support for black education.

Sumner School, the first school for black children in West Virginia, a self-help effort, opened in Parkersburg in 1862. After 1865, education for West Virginia’s black citizens was undertaken wherever there were enough students. Schools were under way in 18 communities by 1868, including Parkersburg, Wheeling, Clarksburg, Charleston, Lewisburg, Martinsburg, Charles Town, and Malden. These early schools were held wherever space could be found, sometimes in homes and churches. In some instances the schools were private and served both adults and children. In Malden, William H. Davis, who later became the principal of black schools in Charleston, taught the young Booker T. Washington in the home of Elder Lewis Rice of the African Zion Baptist Church.

Among the major difficulties was the dearth of teachers. In the beginning, whites served, as did black teachers from neighboring states, particularly Ohio. The first formal effort to train black teachers in West Virginia came at Storer College in Harpers Ferry. The college was begun in 1865 by the Freewill Baptist Church. In 1881 the state agreed to contract with Storer to train African-American teachers. Until the state’s black land grant college, West Virginia Colored Institute (now West Virginia State University), was founded in 1891, Storer College was the only institution in the state preparing blacks for the teaching profession. Later, Bluefield Colored Institute (now Bluefield State College), established in 1895, joined the other two in this mission. These institutions also provided secondary education.

As the railroads and mines drew more black people into West Virginia in the late 19th and early 20th centuries, the need for public education increased. Initially, the school law permitted the establishment of a black school wherever there were 30 black students between the ages of six and 21. Over the years, this number was reduced until a school could be started with 10 students of school age. With this reduction in the number required, elementary schools sprang up in many areas. One of the earliest was the Clarksburg School, for which a construction bid was accepted in 1868. Statewide, there were 207 black schools and 278 teachers serving 7,886 students in 1902. By 1924, there were 453 elementary and junior high schools.

Black high school education began slowly. The first institution to offer such instruction was the Sumner School in Parkersburg, which added high school courses to its curriculum in 1885. This was followed by high schools in Clarksburg, Charleston, and Huntington. By 1923, the number of black high schools had increased to 21. In some cases, cooperative arrangements allowed African- American students to cross county lines to attend high school; for example Preston County students attended in Monongalia County. In other instances students either ended their education at the eighth grade, boarded with families in areas where there were high schools, or daily traveled long distances by train, bus, or streetcar.

In 1919 the state created the position of state supervisor of Negro schools and appointed a Negro Board of Education. In 1933 assistant superintendents of Negro education were appointed in counties having 50 or more black teachers. In addition to the push for more voice in the operation of their schools, blacks also struggled for adequate buildings and materials, for equal salaries for teachers, and for a full nine-month school year.

By 1950, the West Virginia public school system provided separate education for more than 19,000 of the state’s black youth, grades 1–12. Included were schools for black students in institutional settings, including the deaf and blind. Higher education through the baccalaureate level was available at Bluefield State College and West Virginia State. Academics were enriched by strong extracurricular offerings such as dramatics, music, art, various clubs, and athletics. Statewide competitions, tournaments, and exhibitions helped to knit together black communities across West Virginia. The black colleges, elementary and junior and senior high schools, and their administrators and teachers are remembered and honored by their alumni for helping them to develop a strong educational background, basic values, community spirit, and lifelong friendships.

When the 1954 Brown v. Board of Education Supreme Court decision ended segregated schools in the United States, West Virginia began dismantling its system of black education. By the mid-1960s, the process was essentially complete, with African-American students and teachers participating in integratedpublic schools.

This Article was written by Ancella R. Bickley

There aren’t any comments for this article yet.

Click here to read and contribute to the discussion →

This site uses Akismet to reduce spam. Learn how your comment data is processed.